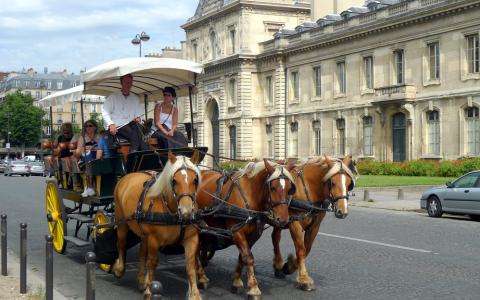 Paris boasts countless wonders. Some are famed throughout the world while others are less well-known but just as interesting. You can get to see them in different ways; by bicycle, in a motorcycle sidecar, by taking a tour in a panoramic bus... But have you considered a horse-drawn carriage ride? Delightfully romantic, a tour of Paris in a calèche is also great family fun and the perfect way to fully enjoy the charms of the capital. A unique and timeless experience that is full of charm and elegance.

The retro charm of a horse-drawn carriage

There are many ways to tour Paris but surely none are more enjoyable than riding in a calèche. What could be more delightful than trotting through the capital’s historical streets pulled by noble, powerful steeds under the control of an immaculately attired coachman, while exploring the intriguing hidden treasures and discovering the many secrets of the capital’s hidden face? And if you want to take the romantic, fairy-tale aspect a little further, why not opt for the Cinderella coaches offered by some companies?

The wonders of Paris at a trot

Soothed by the clip-clop of hooves on the cobbles, you will experience a moment out of time while enjoying the most beautiful views of Paris. The routes, which can be adapted in accordance with your desires, and the duration of which varies between half an hour and two hours, differ amongst the various companies, but all include the most emblematic Parisian monuments and landmarks. You can also visit the most picturesque and unusual neighbourhoods of Paris; places off the beaten track you’ve never seen before. This is just one of the experiences not to be missed during your stay at the Hôtel de l'Université!